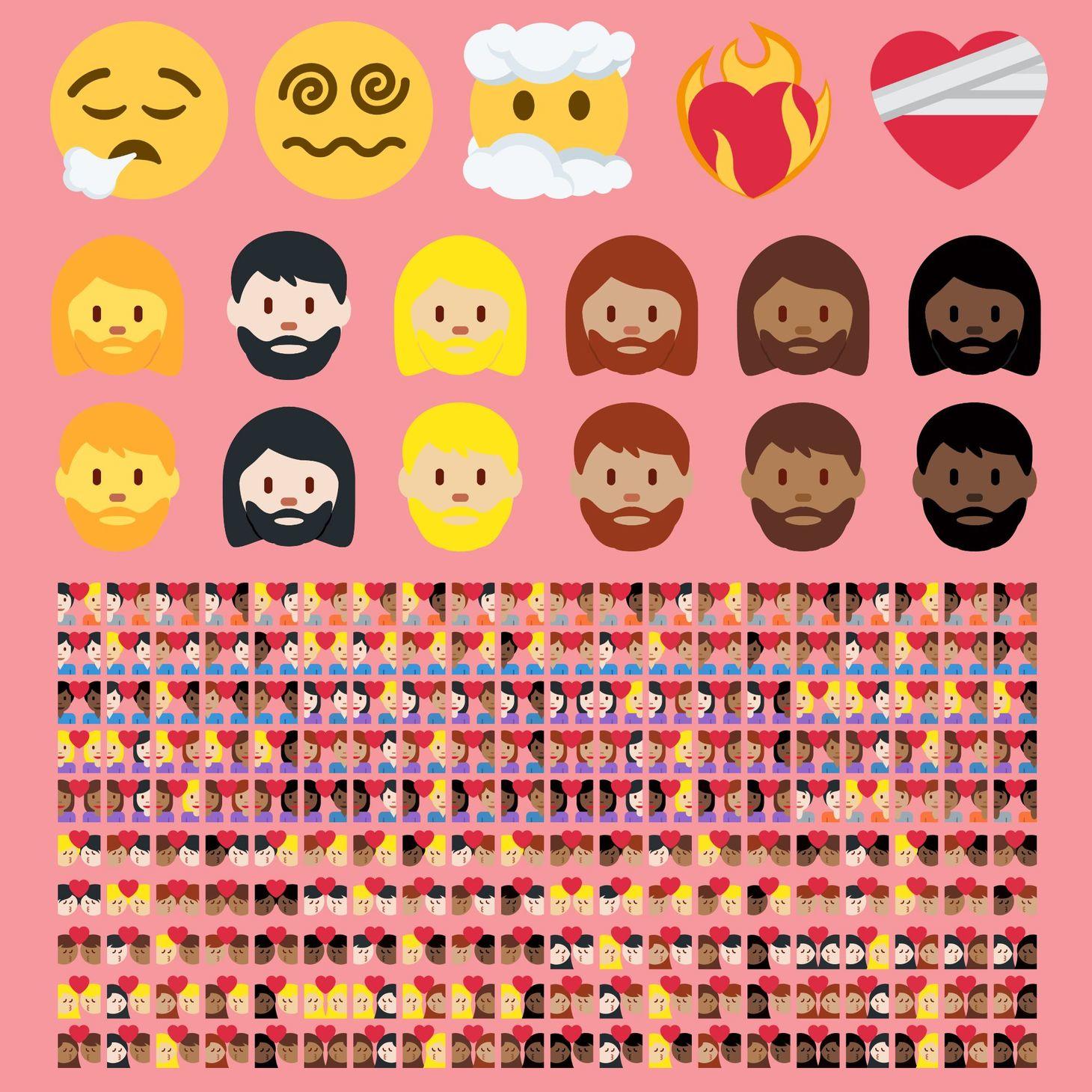 Hello again from all of us here at Emojipedia!

Here’s some new emojis you can now use on Twitter: 😵‍💫 Face with Spiral Eyes, ❤️‍🔥 Heart on Fire and 🧔‍♀️ Woman with Beard. The full list of 217 new emojis can be seen here.

In fact, the past month has been multifaceted in terms of emoji updates, with official updates and beta releases both big and small emerging from several vendors.

The big official emoji release was the aforementioned Twemoji update. Despite reports last month that Twitter is considering a glossy 3D-like overhaul for their emoji designs, Twemoji 13.1 continues the vendor's classic flat designs. That's not to say we won't see this change at some stage in the future, however.

In what is possibly Apple's final emoji update until the release of Unicode's next batch of emoji recommendations, iOS 14.6 updated each of the 🧗 Person Climbing emojis to have them wearing a safety helmet.

As for the beta updates, Google's first Android 12 beta saw hundreds of existing emoji designs updated. Additionally, WhatsApp returned to their emoji flag adventures of old with the introduction of a brand new design in both their iOS and Android beta updates: the Refugee Nation Flag.

Alongside these emoji releases, in this issue we're also discussing how emojis work on Sony's Playstation consoles, highlighting academic research into how emoji meanings can change, and addressing a frequent emoji color query in considerable detail. 🌯

Twitter recently became the latest platform to support the 217 new emojis from Emoji 13.1 via Twemoji 13.1. Despite there being several significant indications that Twemoji will be undergoing a considerable change in aesthetic at some stage in the future, they continue to appear with their classic flat designs in this update.

Google has released its first beta update for Android 12, available to many devices across different Android device manufacturers. Contained within the beta update are changes to hundreds of existing emoji designs across the categories of foods, objects, and nature. These changes include a ☃️ Snowman emoji harking back to an earlier design, as we've seen with other recent Android updates.

WhatsApp has revealed a single brand new emoji in its latest beta updates for both Android and iOS devices. While the platform's new Refugee Nation Flag is not currently recommended for emoji support by Unicode, WhatsApp is no stranger to implementing its own new emojis prior to Unicode sign-off.

Following their bumper iOS 14.5 update, Apple have made a small but important change to the various 🧗 Person Climbing emojis. Based on the scheduling of Apple's past emoji updates, it is quite likely that this is the last change we'll see within their emoji set until they introduce new emojis from Unicode's forthcoming 2021 emoji list.

🎮 How emojis work on Sony PS5

Unlike the Nintendo Switch, which features emojis support via the licensable JoyPixels set, Sony's Playstation 5 and Playstation 4 include a completely custom emoji set in the consoles' messaging areas. Additionally, both consoles had full support for Emoji 13.1 before most vendors' more traditional emoji-supporting devices.

A brand new emoji-oriented study from a team of academics including Alexander Robertson, whose previous work has covered the demographic use of skin tone modifier emojis on Twitter. This latest academic paper and its accompanying visualization tool linked above is an investigation into how emojis' meaning and sentiment can change over time - across years, but also even on a month-by-month basis.

🌎 Making Maps out of Emojis

A mesmerizing emoji-based visualization of our planet, with a huge variety of different customization options and a detailed explanation of how the tool was created. This is best initially viewed on platforms other than Microsoft computers so you can get the full effect, as Windows has never offered support for the various country flag emojis.

Our Chief Emoji Officer Jeremy Burge has done a deep-dive into the underlying logic of Apple's emoji keyboard, since was quietly updated back during the release of 2020's iOS 14.2, but came to the fore with the recent release of iOS 14.5 and its massive expansion of the 💏 Kiss and 💑 Couple with Heart emoji options.

Why does the 📈 Chart Increasing emoji show in red?

Here we address a small but persistent emoji query that takes us back to the Japanese origins of emoji and how different cultural conceptions of color can still permeate across our globalized world.

🎶 Coldplay Denied Use Of Emojis As Song Titles

When attempting to create, in their words, the "first album ever with some tracks that are just called emojis", Coldplay were apparently dissuaded. Here Forbes gives examples of other typographical adventures that musicians have gone on in naming their bands, songs, and albums, though sadly they fail to mention this newsletter author's own low-fi indie album, ¯_(ツ)_/¯.

The agenda for the fourth International Workshop on Emoji Understanding and Applications in Social Media has been finalized, and members of the public are now able to register to attend for a fee. Taking place on June 7th, the workshop is a full-day event that features contributions from Emoji Subcommittee chair Jennifer Daniel alongside a litany of emoji-focused academics. Attendance costs $45 USD.

💌 To our regular readers, thank you for spending your time with our no-more-than-once-a-month Emoji Wrap newsletter! If you're a new subscriber, welcome - we're very glad to have you on board. 🚢

🧑‍💻 If you're want to find out more about the world of emojis from the Emojipedia team, you can check out the previous work of our Senior Emoji Lexicographer Jane Solomon or our Chief Emoji Officer Jeremy Burge on the Emojipedia blog. You can also follow Jane on Twitter via @JaneSolomon, and Jeremy via @JeremyBurge on Twitter and @burgielicious on Tiktok for his British barge-based adventures. 🌊

📨 This month's newsletter has been compiled by me, Keith Broni, Emojipedia's Deputy Emoji Officer. If you fancy it you can follow me on Twitter @KeithBroni, and you can also check out my work on the Emojipedia blog. ✍️