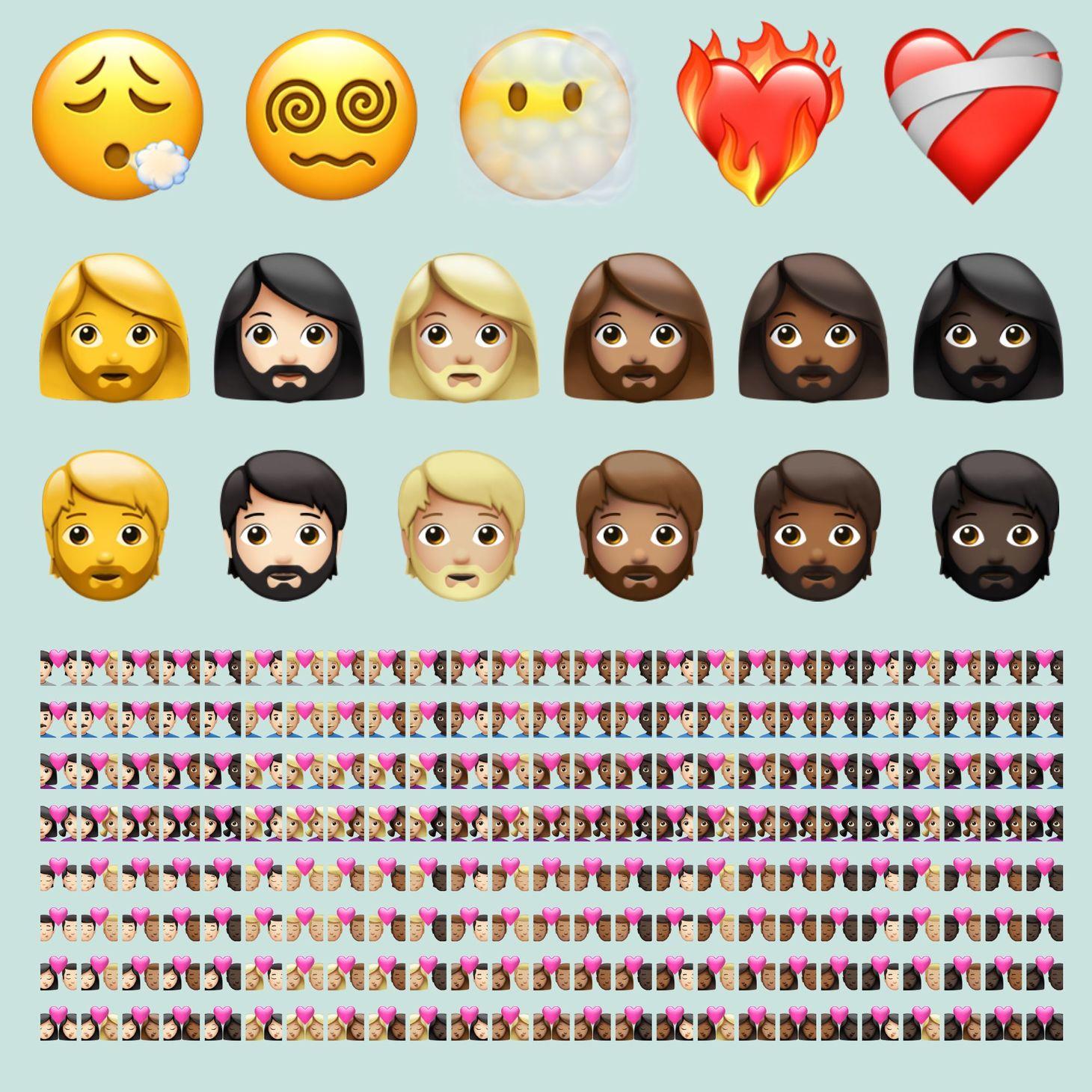 In case you missed it, yesterday Apple released iOS 14.5, bringing new and updated emojis to millions of people worldwide. You can see them all here via our Twitter thread.

Included within the update are all 217 new emojis from Emoji 13.1, such as , ❤️‍🔥 Heart on Fire, 🧔‍♀️ Woman: Beard, and a large number of new skin tone combinations for both the 💏 Kiss and 💑 Couple with Heart.

Emoji 13.1's new emojis aren't the only new emoji editions to iOS 14.5, however. There are an additional 452 💏 Kiss and 💑 Couple with Heart emojis not signed off by Unicode. These additional combinations include people emojis with the default yellow skin tone alongside another humanform emoji with a skin tone modifier, as well as combinations of the gender inclusive 🧑 Person with either the 👩 Woman or 👨 Man emojis.

This is the largest instance of a major vendor introducing non-RGI emojis since Windows introduced support for interracial emoji families back in 2016, though the nearly 52,000 non-RGI emojis (a dizzying figure worthy of the new 😵‍💫 Face with Spiral Eyes emoji) in that set makes Apple's 452 look pretty paltry.

iOS 14.5 also brings the the headline-grabbing new design for the 💉 Syringe emoji on the world, making it more vaccine-friendly in appearance. Interestingly though, the update did not change the design of the 🧗 Person Climbing emojis, as was previously previewed in Apple's own marketing materials, with these designs only just appearing in the first beta of iOS 14.6. Wonder what happened there. 🤷

Apple's new emojis aren't the only show in town, though. As always, below we've curated all the major events and most interesting developments in the emoji world for you. 📰

The Unicode Emoji Subcommittee is once again accepting submissions for brand new emojis.

The announcement included revised guidelines and a new Unicode Emoji Submission Form, as well as revealing a new specific annual timeframe for when submissions will be accepted going forward.

April 2021 heralded in a new emoji king on Twitter. For the first time in our records, the 😂 Face with Tears of Joy emoji was not the top emoji on the platform during a calendar month: instead, the 😭 Loudly Crying Face took the top spot after experiencing significant growth since spring 2020.

Twitter appears to be in the process of completely revamping its in-house emoji designs, and has been teasing this overhaul across several different outlets. While not yet officially confirmed, these glossy new designs would be quite the departure for Twemoji, which has until now been one of the most simple and stable emoji design sets.

Following revised designs being previewed by both Apple and Google back in February, Twitter became the first platform to officially release a redesign of the 💉 Syringe emoji featuring an empty barrel and no droplets of blood.

After releasing their Emoji 13.1 designs to Pixel users back in January, Google earlier this month provided support for these new emojis in Gboard's Emoji Kitchen sticker mash-up feature, adding hundreds of new options to the kitchens already vast library of concoctions.

🧑‍🏫 How Emojis Can Make Your Team More Collaborative

🫓 Why the new matzah emoji is not kosher for Passover

The 🫓 Flatbread emoji received a lot of attention back in March after it was deemed by many (including the state of Israel's official Twitter account) to be a new matzah emoji. This article quizzes whether or not 🫓 Flatbread can be considered an appropriate representation of matzah within the emoji keyboard, and touches upon the intercultural representation of food relevant to many other emojis such as 🧉 Mate, 🫔 Tamale, and 🥟 Dumpling.

Back in March full stack developer Ben Stokes purchased 300 different .kz emoji domains and used them to develop Mailoji, from which you can purchase email addresses using an emoji as the domain name. This is his Ben's own telling of Mailoji's origin story, which involves a viral Tiktok video and hiring a Japanese voice actor.

Last week Apple announced a suite of new hardware, including the AirTag item tracker. Included in the announcement was the ability to customise your AirTag not just with text, but with select emojis as well. However, as reported here by The Verge, certain emoji combinations have been deemed inappropriate AirTag engravings by Apple.

A really cool project here by designer Allwin Williams, which visualises the real-time emoji sentiment of Twitter using Matthew Rothenberg's Emoji Tracker. At the time of writing, the curated group of positive emojis has a collective use twice the size of the curated negative emojis - further proof that emojis are predominately used in positive emotional contexts.

Thank you as always to each and every one of you, our Emoji Wrap subscribers! For those new here, Emoji Wrap is our free newsletter that's sent no more than once every calendar month, and summates the latest and most interesting developments in the world of emoji.

If you'd like to hear from more from the Emojipedia team, consider following on Twitter our Senior Emoji Lexicographer and children's book author Jane Solomon, or our Chief Emoji Officer and emoji historian Jeremy Burge, who also lives a second life as a nautical adventurer across Britain’s waterways.

This month's Emoji Wrap newsletter was compiled by me, Keith Broni, Emojipedia's Deputy Emoji Officer. If you'd like to get in touch with me directly, I'm @KeithBroni on Twitter.

Thanks again for reading, and I hope you and yours are continuing to stay safe as we all approach brighter, virus-free days.