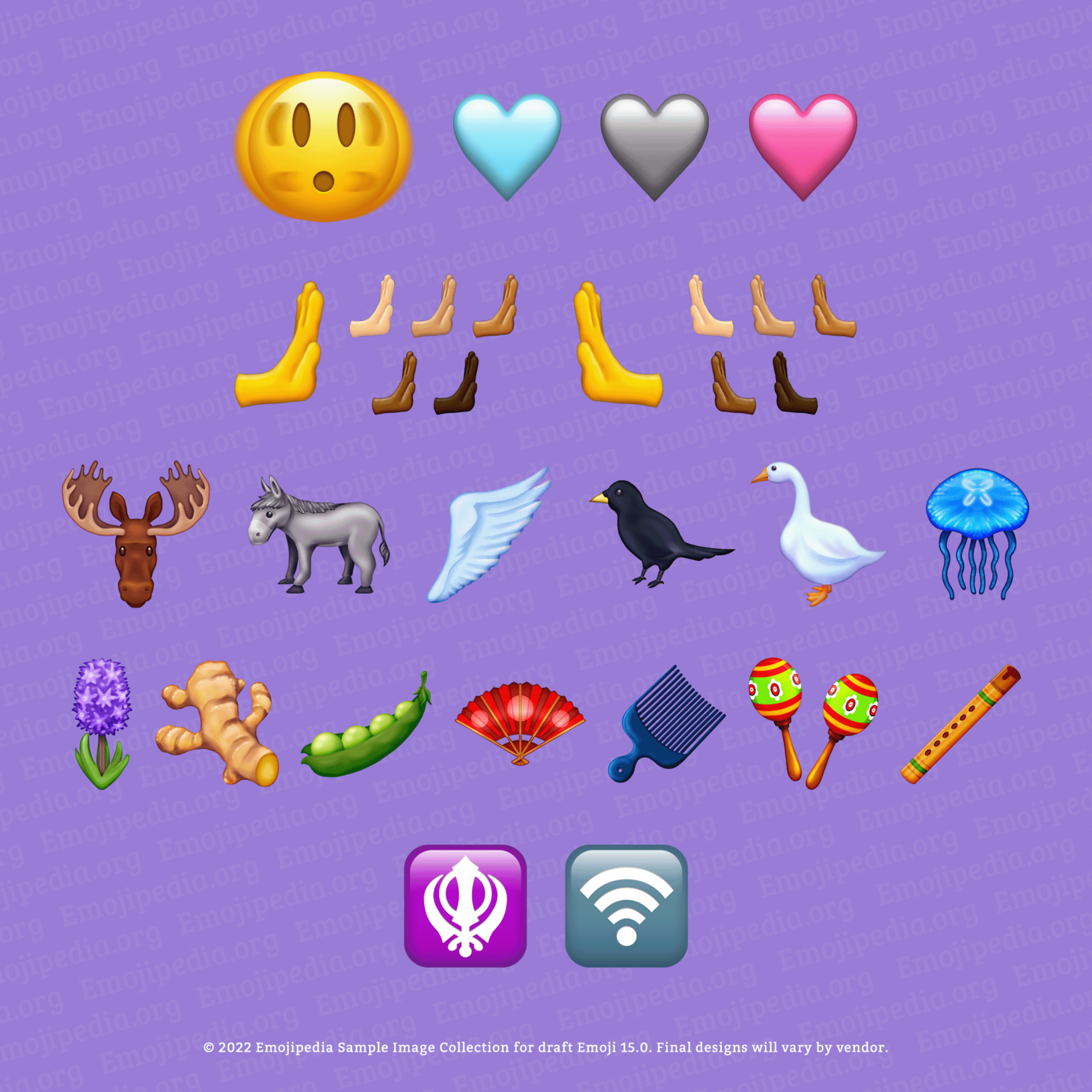 With the ninth annual World Emoji Day nearly upon us, we here at Emojipedia have debuted our sample designs for all of the final draft candidates for September's Emoji 15.0 list.

Included on the draft list is a plain Pink Heart which, if approved, will fulfill one of the emoji world's most long-standing requests. A Light Blue Heart and Shaking Face are also under consideration for approval later this year.

Are you amongst those who have been yearning for a plain Pink Heart? Or has a different draft emoji captured your imagination? As always, we're asking members of the public to let us know which of these emoji candidates they are most excited to see on their emoji keyboards in the next year or so.

Additionally, voting for the Most 2022 Emoji has been underway on Twitter over the last week, and the finals will be between 🫠 Melting Face and the winner of the semi-final bout between fellow newcomer 🥹 Face Holding Back Tears and the evergreen 🤦 Person Facepalming.

We also have no less than four brand new vendor sets available to view on Emojipedia since our last edition of the Emoji Wrap. The latest of these is the Microsoft Team's animated 3D Fluent emoji set, which made their Emojipedia debut mere minutes before we hit send on this newsletter.

These new vendor sets are discussed further below, alongside a new expert-filled "Emojis Across The World" video series set to debut on the Emojipedia YouTube channel, brand new language supports for our Emojipedia site, and new record-breaking emoji use on Twitter.

Thank you as always for being subscribed to Emojipedia's Emoji Wrap newsletter, and know that if I text you "🥳📆" it means Happy World Emoji Day for this Sunday!

Just as we did ahead of World Emoji Day 2021, we've released our Emojipedia Sample Images of the latest draft emoji list.

As always, some might not make the cut, but over recent years every final draft emoji has been approved for release by Unicode. This means that the Pink Heart and Shaking Face are very likely to debut within our emoji keyboards from late 2022 onwards.

Originally previewed just prior to World Emoji Day 2021, the 3D Fluent set has an additional striking feature: over 800 of the designs are animated.

At the start of May, Google launched a brand new emoji-focused font: Noto Emoji. Monochrome and minimalist, the font renders emojis as simply as possible and also introduces a series of new blob-inspired designs.

Initially launched with a series of intentionally divergent designs (e.g. displaying 🫕 Fondue as a bibimbap), the set has since been updated to accurately reflect Unicode recommendations, with both of these sets now viewable on Emojipedia.

Earlier this week Meta CEO Mark Zuckerberg announced that WhatsApp will be updating its emoji reactions feature for both iOS and Android devices. This new update will allow users to react to messages with any emoji included within their emoji keyboards.

As part of the global rollout of their updated reactions feature, WhatsApp contacted us here at Emojipedia to provide them with some insights into how certain emoji reactions could be misinterpreted by the less emoji literate amongst us.

On Tuesday we here at Emojipedia rolled out a brand new, globally-focused feature on our site.

Users can now experience Emojipedia in Spanish, French, Portuguese, German, and Italian, with further languages expected to be supported in the very near future.

Last year, ahead of World Emoji Day 2021, we revealed that emoji use on Twitter had reached a ten-year high. This year it's happened again, with another record-breaking increase in emoji use occurring on the platform over the last few weeks.

📲 'If I text you' emoji meme explained

The latest emoji-based Twitter trend/meme is all about pun-fuelled emoji repurposing (CC: Dr. Sarah Wiseman and her excellent "Why 🍕Means I Love You" research paper, the implications of which may well be heavily featured in a soon-to-be-released Emojipedia project 🤫).

🧑‍💻 Beyond the smile: how emoji use has evolved in the workplace

Slack and Duolingo teamed up to survey remote workers from across the globe on different cultural and workplace variations in emoji use and interpretation. Here are their findings, which make reference to 💸 Money with Wings, 🙂 Slightly Smiling Face, and 🍑 Peach.

We recently were able to add Sony Playstations's support for Emoji 13.1 to the Emojipedia archives.

If you want to learn more about how emojis work on Playstation 4 and Playstation 5 consoles, our article from summer last year has you covered.

The more places you can use the Google's amazing Emoji Kitchen feature the better, and Slack recently removed barriers from using these emoji mash-up stickers on their Android app.

💩 Twitter just filed a lawsuit against Elon Musk. It's using the famous poop emoji tweet against him.

Elon was caught talking 💩 Pile of Poo when it came to his Twitter acquisition, and it could cost him.

📆📺 Emojis Across The World

As you know very well by this point in the newsletter, the ninth annual World Emoji Day is just days away. As part of our global hosting duties, Emojipedia will debut a series of interview-focused videos exploring emojis from several different angles, together titled "Emojis Across The World".

These videos will debut on Emojipedia's YouTube channel over the next few days and will feature contributions from a variety of global emoji experts and aficionados. You can see our full list of contributors via the above link.

That does it for this bumper World Emoji Day 2022 edition of the Emoji Wrap! 🌯📯

To keep up with what else we have in store in the leadup to July 17, you can read about all the happenings on the Emojipedia blog, use the #WorldEmojiDay hashtag or follow the official accounts: