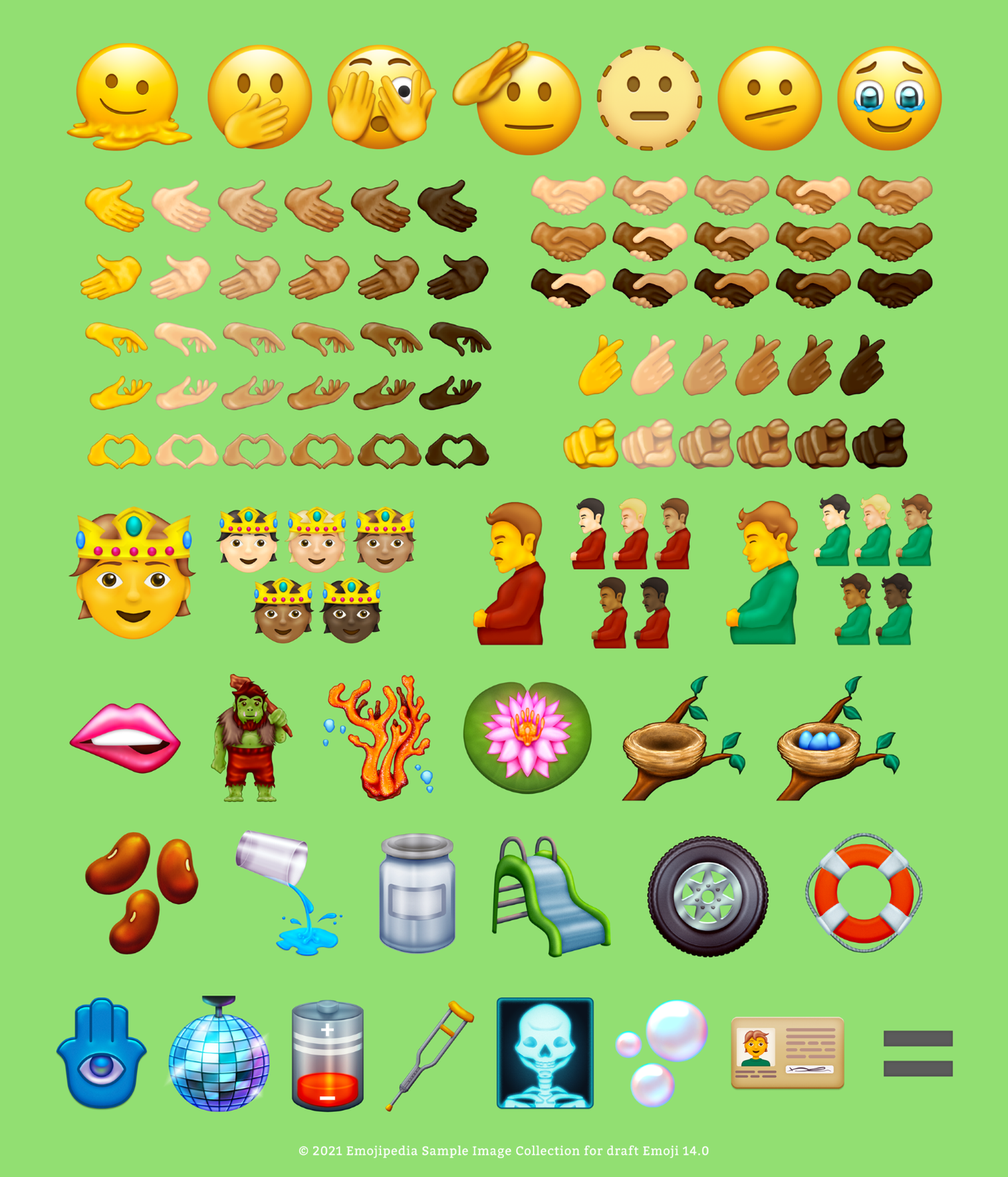 It's been a couple of hours since clocks clicked past midnight in the likes of Tonga and parts of Australia, so it's official folks: World Emoji 2021 is underway! 🥳📅

As part of the global celebrations, we here at Emojipedia have unveiled our sample images for the current Emoji 14.0 draft candidates and we're asking members of the public to let us know which of these emoji candidates they are most excited to see on their emoji keyboards in the next year or so. 🤩

While not yet officially recommended for release by Unicode just yet, these draft emojis include a melting face, a face holding back tears, and a heart hand gesture.

The Most Anticipated Emoji 2021 is part of our annual World Emoji Awards, where we have already announced the Most Popular New Emoji and given a Lifetime Achievement Award. 🥇

Alongside the Most Anticipated Emoji, we're also asking you to tell us what was the Most 2021 Emoji. We've had a tournament bracket unfolding on Twitter over the last few days, and it's come down to a battle between 💉 Syringe and 🦠 Microbe. Voting closes tomorrow, so make sure you have your say on the Twitter poll here!

The World Emoji Awards aren't the only major event of World Emoji Day 2021 though - far from it! In the build-up to the day itself we've had emoji vendors Google, Microsoft, and JoyPixels announce new updates to their emoji sets, unveiled Skype's animated emoticons on Emojipedia, and been able to share with the world that emoji usage is currently at an all-time high. It's truly a day of all-out emoji celebration. 🤯

Here's hoping that you, dear reader, are safe and well, and - once again, from the bottom of our 💕 - Happy World Emoji Day 🎉

We've released our Emojipedia Sample Images for Draft Emoji 14.0 in honor of World Emoji Day 2021 and our annual World Emoji Awards. Don't forget to vote for your Most Anticipated Emoji amongst these draft candidates, as well as for the Most 2021 Emoji. 🗳️

Google have just announced a brand new update to their emoji set is beginning to roll out across platforms such as Chome OS, YouTube Live Chat, and (finally) Gmail. This emoji update will feature in Android 12.0 upon its release, though the OS update itself isn't expected until later this year.

⏩ Faster Emoji Updates on the way for Android Apps

Alongside their new emoji design update, Google have revealed that they will be adding emoji support to their Appcompat support libraries when Android 12 is released. This means that Android apps of all kinds will be receiving emoji updates at a much faster rate, without the need for an OS update.

Brand new on Emojipedia: the animated emoticons from Skype and Microsoft Teams now appear alongside their equivalent emojis from other platforms. While Skype's animated emoticons continue to be implemented via shortcodes such as (happy) and (inlove), there have been ongoing efforts to align the set with the standardized Unicode emoji recommendations, including a new Unicode-adjacent layout for Skype's custom emoticon picker.

Yesterday Microsoft announced a completely new aesthetic for their emoji set. Referred to as Fluent, this emoji style is currently available on social learning platform Flipgrid and will be coming to Microsoft Teams and Windows by the end of 2021. Amongst the 3D-rendered designs is a very familiar face as the new 📎 Paperclip emoji.

Google's Emoji Kitchen recently underwent another major expansion, now suggesting its elaborate emoji-inspired stickers based on the text-based contents of a message. However, a slightly-hidden feature in a Gboard beta update brought a bit of old-school emoji magic: with a little wave of the 🪄 Magic Wand Google's beloved blob designs were added to the kitchen. You can see every emoji that actives the Emoji Kitchen (including the blobs) on a new dedicated page on Emojipedia.

Last month Emojipedia became the custodians of Emojitracker.com. Predating Emojipedia by just two weeks, Emojitracker has been tracking the use of Unicode 6.0's original 2010 emoji recommendation on Twitter since July 2013 and is often cited by those seeking cumulative emoji stats. We've got some exciting plans for Emojitracker's future. 🔮

📈 Emoji Use At All-Time High

Finally, to close off the news portion of this special edition of the Emoji Wrap, we can reveal that as of right now (July 2021), emoji usage has never been higher. This is based on an analysis of over 6.7 billion tweets spanning nearly 10 years - and we're not done with the emoji data revelations just yet! Keep an eye on the Emojipedia blog for further data revelations as World Emoji Day progresses. 🧮👀

🛑 How the Monkey Emoji is Racist

World Emoji Day is a celebration, but it would be remiss of us not to briefly call attention to recent events. Emojis can be used to reflect the world around us, and sadly that world often fails to uphold common decency and respect for all. This article by our Chief Emoji Officer Jeremy Burge discusses that in a too-the-point manner.

A second serious emoji-related note: another year has passed where users of the Chinese social platforms WeChat and Sina Weibo have noted the disappearance of select custom emojis, including their version of the 🕯️ Candle. This is not the only instance where emojis have been politicized in China: other stories including the lack of support for the Flag for Taiwan emoji and subverting censorship of the #MeToo movement.

To finish on a lighter note, last month the eldest daughter of Kim Kardashian (of Kimoji sticker fame) and noted emoji aficionado Kanye West had a 💩 Pile of Poo emoji themed party. We hope she enjoyed herself, and that she is enjoying World Emoji Day 2021 thus far! 🥳

As always, thank you for being a subscriber of Emoji Wrap. 🌯 It's our pleasure to provide you with the latest news in the world of emojis, not just on World Emoji Day but throughout the entire year. 🗓️📅📆

You can also follow the members of our Emojipedia team:

💌 Today's bumper edition of the Emoji Wrap newsletter has been compiled by me, Keith Broni, Emojipedia's Deputy Emoji Officer. If you fancy it you can follow me on Twitter @KeithBroni, and you can also check out my work on the Emojipedia blog. 🧮📈