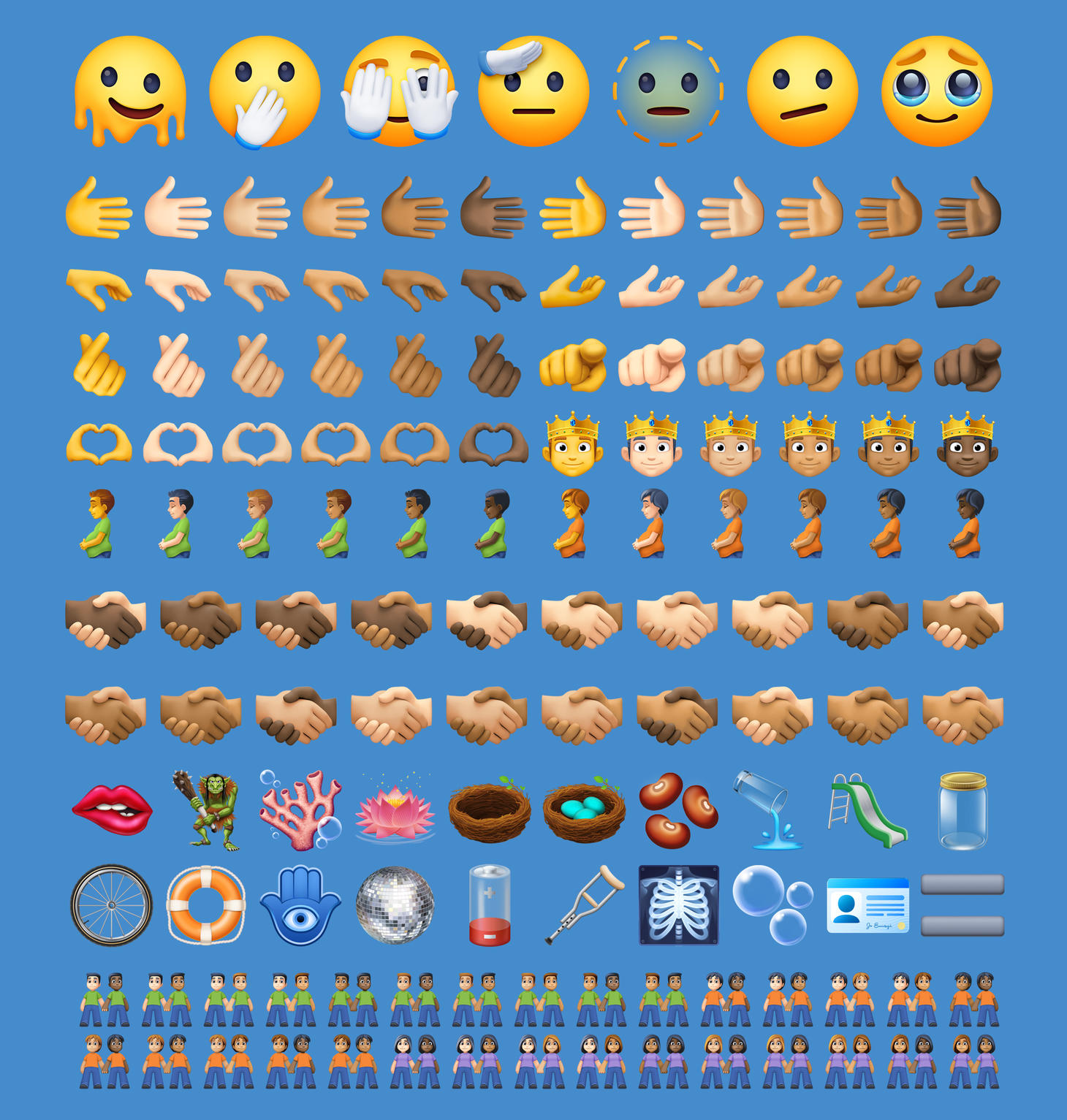 This means that Facebook's emoji set (shown above) and the WhatsApp emoji set that are used on non-Apple devices now include emojis such as 🫠 Melting Face, 🥹 Face Holding Back Tears, and 🫶 Heart Hands in the same style as these platforms' other native emojis.

Following a similar update in Apple's iOS 15.4 last month, this Facebook update resolves a years-old instance of emoji design fragmentation: the 🤭 Face with Hand Over Mouth now has a consistently contented design across all major emoji vendors for the very first time.

Speaking of Apple, Facebook and WhatsApp users on iOS devices will continue to see native Apple emoji designs which are provided by the operating system. As we covered in last month's Emoji Wrap, Apple also introduced support for Emoji 14.0 within iOS 15.4. 🆕🍏

Meanwhile, while Unicode are still considering what new emojis will debut in this September's expected Emoji 15.0 recommendations (one candidate being a plain Pink Heart), the consortium have announced that they are now accepting proposals for 2023's Emoji 16.0. 📜✍️

However, Unicode will not be considering any new flag emoji proposals for Emoji 16.0. This is a decision you can find summarized on the Emojipedia blog, and you can also read Unicode's annoucement on the matter. 🙅🎌

Plus, emoji reactions in Google Docs, an interview with the Emoji Kitchen's head chef, and 10 years' worth of data on 😂 Face with Tears of Joy and 😭 Loudly Crying Face current battle on Twitter - all in this month's edition of the Emoji Wrap! 📯🌯

107 new emojis from Emoji 14.0 were also introduced for WhatsApp users in the messaging platform's 2.22.8.79 update for Android devices. Alongside newcomers such as 🫡 Saluting Face, 🫵 Index Pointing at the Viewer, and 🧌 Troll, this update subtly changed Emoji 13.0's 🫕 Fondue design.

🙅🎌 Propose A New Emoji, But No More Flags

As mentioned above, Unicode is now once again accepting proposals for brand new emojis. Proposals will be accepted for consideration until July 31st 2022, with successful proposals expected to be included in 2023's Emoji 16.0 recommendations and released across emoji keyboards from late 2023 into early 2024.

However, Unicode will not be accepting any new flag emoji proposals. We've summarized their rationale in this blog post here. 🙅🎌

🏳️🏴 The Past and Future of Flag Emojis

If you'd like to delve beyond our summary linked above, you can read Unicode's full blog post on the past and future of flag emojis here, which fully outlines their decision to not consider any flag emoji proposals for Emoji 16.0. 🏳️🏴

Words ever fail you when reviewing someone else's writing? Well soon Google Docs users will be able to add emoji reactions to any documents they're reviewing, with all of the currently 3,633 Unicode-recommended emojis being made available as reaction options. 🥰😡

Last year the 😂 Face with Tears of Joy was overtaken as Twitter's top emoji for the first time in nine years. Last month it reclaimed its title from 😭 Loudly Crying Face, albeit by the slimmest of margins.

we visualized the ongoing duel between these two emojis for the top spot, while also displaying the rise and fall of 😂 Face with Tears of Joy over the last ten years. 🔟🗓️

🤨 What’s that weird box next to my emoji?

Here they discuss why emojis have historically often appeared as mystery boxes (e.g. 􏿿􏿿􏿿􏿿􏿿􏿿) and what Google has been doing to resolve this issue on Android devices (as covered on the Emojipedia blog ahead of World Emoji Day 2021). 🤖⏫

👩‍🍳 Learn all about Google's Emoji Kitchen from its head chef

In another interview with Google's Jennifer Daniel, Android Police's Ryne Hager interviews the [Emoji Subcommitte] Chairperson(https://blog.emojipedia.org/meet-the-new-chair-of-the-unicode-emoji-subcommittee/) about Gboard's Emoji Kitchen feature, which she co-created back in early 2020.

They discuss the creative process for the Kitchen's mash-ups, as well as some of the feature's wildest designs. 🐙🕷️

Here the Very Fine Day interview newsletter by VICE AU's Brad Esposito catches up with Emojipedia's former Chief Emoji Officer Jeremy Burge, talking about Emojipedia's founding and what it's like living on a narrowboat and sailing across the United Kingdom. 🛥️⚓

That does it for another edition of the Emoji Wrap - Emojipedia's monthly-ish emoji newsletter! 📯🌯