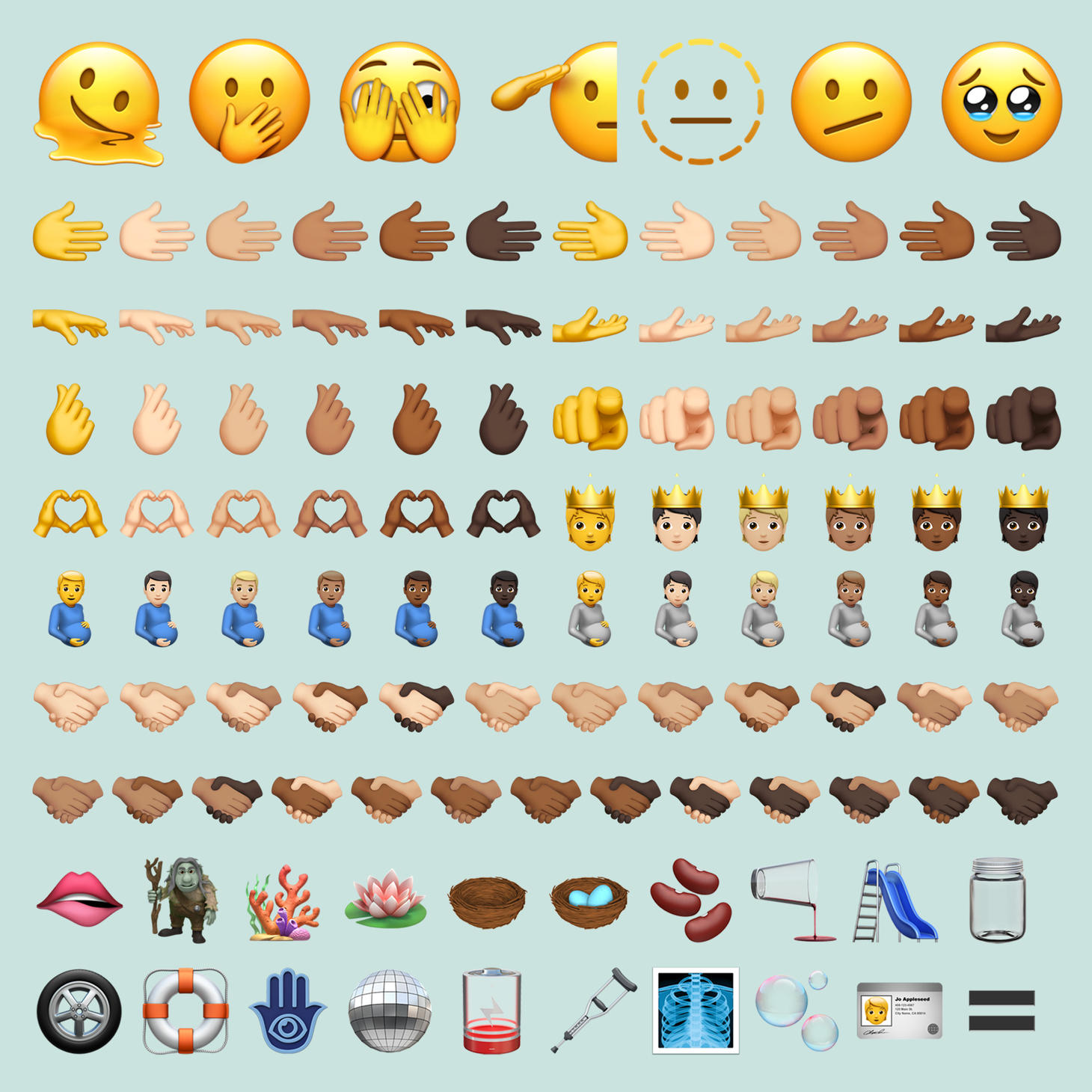 Happy St. Patrick's Day to all those who celebrate it across the globe! ☘️💚

In case you missed it, earlier this week Apple officially released their latest batch of OS updates, including iOS 15.4.

Contained within these updates was support for Emoji 14.0 emojis like 🫠 Melting Face, 🫡 Saluting Face, 🫤 Face with Diagonal Mouth, and a variety of new 🤝 Handshake emojis (including 11 non-RGI options). A total of 123 new emojis were introduced.

One of Apple's new emoji designs confused some users, however: wasn't the new 🫢 Face with Open Eyes and Hand Over Mouth already in the emoji keyboard? Google emoji maestro and Chairperson of Unicode Emoji Subcommittee Jennifer Daniel outlines the source of this confusion in her latest blog post.

Apple aren't the only emoji vendor to debut their support for Emoji 14.0 since our last edition of the Emoji Wrap, however. Last week Twitter released Twemoji 14.0, also debuting the likes of 🫠 Melting Face and 🫡 Saluting Face.

This update came swiftly after a minor Twemoji 13.1.1 update, revising a small number of emojis such as 🔋 Battery, 🇧🇪 Flag: Belgium, and 🇮🇳 Flag: India.

Speaking of revising a small number of emoji designs, Samsung released an update that revised the design of a single incredibly popular emoji: the ✨ Sparkles.

All this and more in this latest edition of the Emoji Wrap newsletter! 🌯📯

Here Google's Jennifer Daniel - Emoji Subcommittee Chairperson and mastermind behind Gboard's Emoji Kitchen - details the confusion users may have experienced when using Emoji 5.0's 🤭 Face with Hand Over Mouth across different platforms, and how the new 🫢 Face with Open Eyes and Hand Over Mouth should reduce the number of emoji faux pas in the future.

These new additions also include 🫰 Hand with Index Finger and Thumb Crossed, 🫵 Index Pointing at the Viewer, and 🧌 Troll.

In an update to their One UI Android software layer, Samsung recently made a small but significant update to a single incredibly popular emoji: the ✨ Sparkles.

😂 Tears of Joy (Just About) Returns as Twitter's Top Emoji

Back in March of 2021 😂 Face with Tears of Joy was overtaken as Twitter's top emoji: a position it had held since March 2012 when Apple first began using the Unicode Standard.

Less than a year later, the 😭 Loudly Crying Face has dropped back into second place and 😂 Face with Tears of Joy just about reigns supreme once more. How long that last this time around has yet to be seen, however, as already our data since January 2021 is indicating that the two are vying back and forth for the top spot. 🤏📈

Following the invasion of Ukraine, the 🇺🇦 Flag for Ukraine emoji saw a huge surge in solidarity-based use, propelling it to be the top emoji page on Emojipedia for a number of days. Another emoji that has experienced a significant surge in response to the conflict is the 🌻 Sunflower - Ukraine's national flower.

Here Mashable investigates, and details one particular sunflower-involving incident which went viral and is likely behind the spread of the 🌻 Sunflower emojis across the world. 💙💛

🧠 Meaning above (and in) the head: Combinatorial visual morphology from comics and emoji

Professor Neil Cohen, who co-authored the proposals for the new 🫠 Melting Face and 🫥 Dotted Line Face emojis, recently had a new academic research paper published with investigated neurological responses to “upfixes” - an attribute of visual language shared between comics and many emoji designs.

This link is a summary of that paper from the Professor's Visual Language Lab blog. 🧠❣️

Were you briefly seeing a lot of "Ud83d" and similar odd text strings on Tiktok comments? This article by The Teal Mango (🥭) explains how this was due to an emoji glitch which displayed the underlying Unicode codepoints instead of the emoji design.

This led to a lot of users seeing "‘Ud83 udc80" instead of the 💀 Skull emoji, which is a popular means of expressing laughter on the platform.

😷 The surprising case for emoji in healthcare

Here Fast Company explores a recent article published in the Journal of the American Medical Association advocating for more medical emoji to join the like of 💊 Pill, 🩹 Adhesive Bandage, 💉 Syringe, and the new 🩼 Crutch within the emoji keyboard.

That's it for this edition of the Emoji Wrap - Emojipedia's 🆓 newsletter! 🌯📯