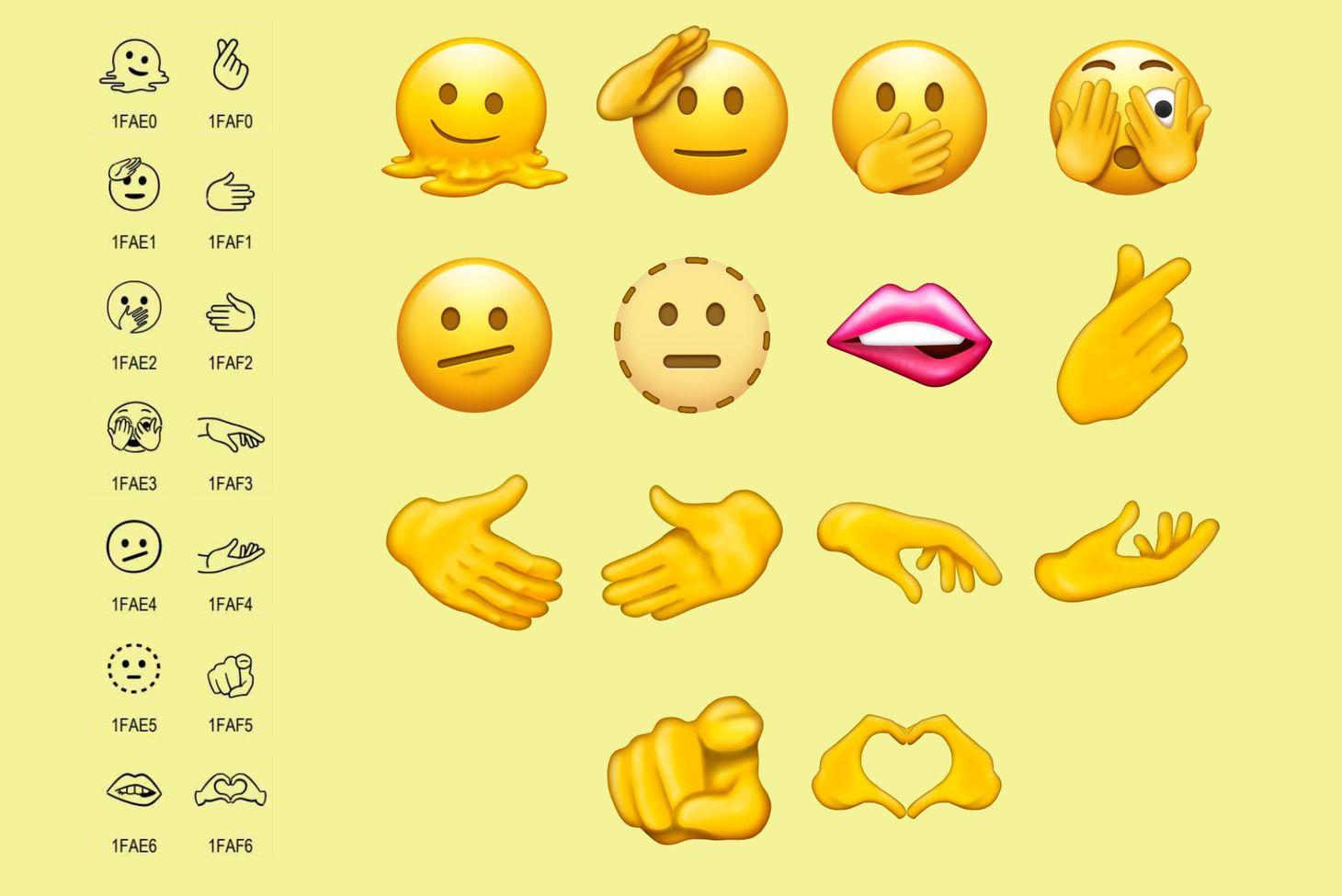 Hello and welcome to the 50th edition of Emojipedia's Emoji Wrap newsletter! ✨5️⃣0️⃣✨

With this milestone, we bring news of brand new emojis coming to your devices from late 2021 into 2022.

Despite the timing, this news is unrelated to yesterday's Apple's keynote event. Instead, it comes from version 14 of the Unicode Consortium's Unicode Standard, which was also fittingly officially released yesterday (September 14th).

Included within yesterday's Unicode release were 838 brand new characters, 37 of which were new emoji code points. These include Melting Face, Saluting Face, Pregnant Man, Heart Hands, and Mirror Ball. All the other code points were for new text characters.

Additionally, Emoji 14.0 (released today alongside Unicode 14) recommends a further 75 emoji sequences, most notably including mixed skin tone support for 🤝 Handshake) for the first time. This means a total of 112 new emojis were recommended in the latest release. ✨🆕✨1️⃣1️⃣2️⃣✨

As our regular readers will be aware, we previewed these new emojis earlier this year ahead of World Emoji Day 2021. At that time these emojis were still draft candidates, still awaiting the formal approval that they have now received. No draft candidates were removed, so you can breathe easy if you saw any you love!

See what's new from me on emoji-related happenings in both Unicode 14 and Emoji 14.0 and for the question of why there's a pregnant man emoji in the mix, Emojipedia's Senior Emoji Lexicographer Jane Solomon explains.

As well as coverage of Emoji 14.0, this edition of the Emoji Wrap includes emoji updates for both WhatsApp and Samsung, a final hurrah from a seemingly-discontinued emoji set, further sightings of a possible Twemoji redesign, speculation about Tiktok's use of the 🪑 Chair emoji, and an exploration on how emojis can be used used to express grief.

As we've discussed in detail above, Unicode 14.0 and its associated Emoji 14.0 recommendations will bring 122 brand new emojis to our digital devices in the coming months. We suspect that Google platforms will be the first to introduce these new emojis, perhaps then followed then by Twitter, with other vendors such as Apple debuting their designs in early 2022.

The announcement from the Unicode Consortium that Unicode 14.0 is final. For implementers, or those really into the details, Unicode has a wealth of information on this release. Useful resources from Unicode include release notes, charts, and data files.

And from Jennifer Daniel, chair of the Unicode Emoji Subcommittee, this great explanation of why some of the new emojis were chosen. Worth a read if you haven't seen the value in the new Palm Down Hand emoji.

Why Is There A Pregnant Man Emoji? 👨👶❓

In this article from the Emojipedia blog, our own Senior Emoji Lexicographer Jane Solomon explores the origins of the new Pregnant Man emoji officially introduced in yesterday's Emoji 14.0 list.

Released for WhatsApp for Android last month, the messaging app's 2.21.16.20 update include new emojis from late 2020's Emoji 13.1 list such as ❤️‍🔥 Heart on Fire and 🧔‍♀️ Woman: Beard, but oddly did not provide support for 🧔‍♂️ Man: Beard or the new variations of 💏 Kiss and 💑 Couple with Heart also recommended in Emoji 13.1.

Twitter users in Turkey can now emoji-react to tweets 🤔👏❤️

Another edition of the Emoji Wrap, another new Twitter feature showing us glossy new emoji designs that could be coming in a full-scale redesign of Twemoji currently under development. This time Twitter users in Turkey have reported that emoji reactions akin to those available on platforms such as Facebook can now be used to respond to tweets.

Throughout 2021 we've seen the surprise return of an emoji set that was long since thought to be retired: LG's native emoji set on its Android mobile devices. While the LG Velvet's Android 11 emoji update introduces nearly 1,500 emojis to the LG design set, given that LG formally departed from the mobile device manufacturing market mere months ago, this return is more final farewell than triumphant return.

As part of the 10th birthday of Messenger, Facebook recently previewed a selection of new features coming to the platform in the near future. One such feature is the ability to create emoji-based 'word effects', which allows users to associate custom words or phrases with select emojis that will cascade up a user's screen whenever those words or phrases are used.

Ahead of the release of their One UI 4.0 update later this year (which a beta release has indicated will include Emoji 13.1 support), Samsung made minor revisions to designs such as 👹 Ogre and 👺 Goblin through, depending on the device, either their One UI 3.1.1 update or a firmware update for One UI 3.1.

RIP Emojis and Words to Contextualize Mourning on Twitter 🪦🤍

Does the Chair Emoji Mean Laughter on TikTok … or Something NSFW? 🪑👀

In recent months and years, Tiktok has become a frequent source of new emoji trends and emergent meanings, such as the rise of 💀 Skull and ☠️ Skull and Crossbones as emoji expressions of laughter. Here Distractify speculates about a new emoji trend on the platform that we've also been considering here at Emojipedia: the spamming of the seemingly humble 🪑 Chair emoji within Tiktok's comment sections.

That's a wrap (ba-dum-tss 🥁) on the fiftieth edition of the Emoji Wrap, folks! 🌯

Reflecting on a milestone like this, I'd just like to express that all of us here at Emojipedia are incredibly grateful for your continued interest and support 🙏🥰 Here's to our next fifty issues! 🥳

As always, if you'd like to keep up-to-date with the latest emoji news as it happens, you can follow Emojipedia on Twitter, as well as the individual members of our Emojipedia team: